A downloadable game for Windows and macOS

Our team's creation for the Ludum Dare 36. The theme was Ancient Technology.

Paws of Purrsia: Kitty Litter is a 4-player party game where players coordinate their moves to keep a palanquin from tipping-over. Think Persian-version of Crazy Taxi with four drivers controlling one vehicle. Remember, you are carrying VIPs on a palanquin, so pay attention to their individual demands while marching.

WHILE THIS GAME IS MEANT FOR FOUR PLAYERS, YOU CAN TOTALLY PLAY IT ALONE IF YOU HAVE A GOOD CLAW GRIP

Ancient Purrsia is a hub for foreign trade, and people from all around the known world pass through the city on their trade routes. The King of the Kingdom--King Fat Cat--is having an epic parade in honor of his anniversary of throne. You are assigned to carry his most prestigious guests and His Majesty himself! No single cat can bear such responsibility alone, so the four of you must bear him together.

The city is colorful and extravagant, as are the people who pass through it. From rich merchants to shady individuals, holy men to warriors, winos to weirdos.

Level one - King Fat Cat: His Royal Highness is the latest in a long line of benevolent rulers. He doesn't quite measure up to his father in terms of brains, but he believes he is the best of his family and will be the most awesome ruler.

Level two - Drunk Cat (developing): He's a very rich and powerful cat, who may have over celebrated a bit at the King's parade. He's drunk and quite confused, so he never knows which way he needs to go. He also tells rambling stories as you walk. Don't move him too fast or he will vomit, don't start and stop too much or he will vomit.

Level Three - His Husky the Excellency(developing): He's a very serious and stoic kind of guy, who doesn't recognize jokes and takes everything said at face value. He has been told of a vendor selling hot dogs for food(!) and he is incredibly insulted. He demands that you take him to this vendor so that he may investigate these claims. He wants to go fast and he needs to stay cool.

Copyright of visual arts, soundtracks and codes in this game belong to awesome people in 8keys Studio. Please contact us before usage.

9.2.16: Fixed error with goal at end of level one. Made the palanquin sticky. It is now theoretically possible to win the game, but still stupidly hard. 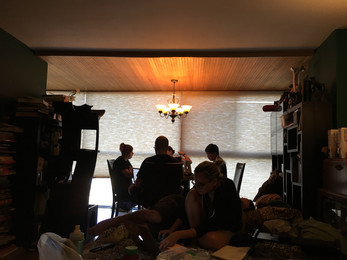